The second day and first day at sea.  We took this opportunity to sleep in.  Hubby had a sound sleep; I had a relatively good one, getting up two or three times to use the potty.  I woke up the last time and decided to check the time, I was not used to waking up late and with the room in total darkness, I was getting antsy.  How could I not stay in bed later than usual when I am on vacation?  Anyway, not much later, the phone rang incessantly and at first we did not know where the noise was coming from.  Anyways, they rang to tell us our breakfast is on the way. 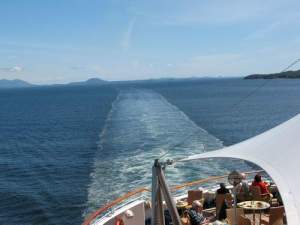 Breakfast consisted of dry toast, two kinds of coffee, and fruit plates.  It was fine.  We were rushing to catch the drawing at the jewelry raffle.  I came down too late the drawing was over and had I won I would not be qualified to receive the prize because presence at time of drawing is one of the major requirements in getting the prize.  Tsk, tsk. 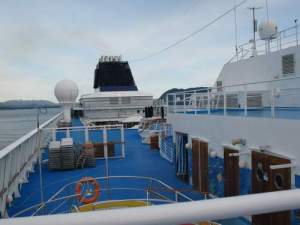 Since this is a sea day, and this is a freestyle cruising, it’s a do-it-yourself-whenever day.  We ate and ate some more.  In between, we played basketball, ping-pong and some more basketball.  We also napped after a wonderful lunch at the Seven Seas.  Hubby snapped some shots of some of our dishes.  They were really flavorful.  The photos however to my mind did not turn out the way they tasted. 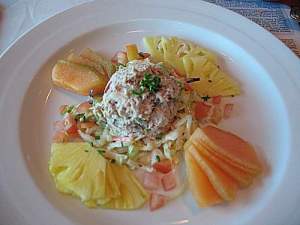 We did a lot of sightseeing today.  We were amazed at how fast we were going.  Before we retired for an after-lunch nap, we were cruising in the middle of nowhere.  When we woke up less than an hour later, we saw snow-peaked mountain ranges, dense pine forests, a lonesome fishing vessel, and some smokes coming from what is apparently a logging operation.  It was disappointing to see that a large part of a side of a mountain has been balded when they cut off the trees, apparently for logging.  We took a lot of photos and hubby took some footage.

We returned to LAS TRAMBLAS for afternoon appetizers. They have new items so we sampled them.  We ordered a Canadian beer, in addition to the free champagne at the art auction; we have been pretty good with our alcohol consumption–not drinking too much, actually, we under drank the whole time we were there.

Our day was highlighted with a dinner at LE BISTRO, that swanky, dress-up French restaurant with a cover charge, which we were getting at 50% off by virtue of eating after 8:30.  We had a five-course meal- a cold appetizer, a warm appetizer, a soup, entrée, and dessert.  It did not live up to my expectation.  The food is either salty or too buttery.  It was good anyways, for half of what it was used to.  I am probably not just a French dish type of diner, although the other diners amused me.  On one table, there were two couples, an Asian couple and a Caucasian couple.  They look like they are either meeting on this cruise for the first time; or they were all just on the getting to know each other stage.  One can tell when the women and men are both in their best behaviors and seem to be minding their every p’s and q’s.  On the table next to us, was a couple that from the looks of it have been married awhile.  The woman made a special mention that the dishes that were on our table were original by so and so designer, one whose name escaped me, but he was a fashion designer.  What the heck was he doing designing dishes?  She kept mentioning that her eye could detect quality, something to that effect anyway.  My husband and I mumbled politely to every thing she was blubbering about.  Then there was this other table which is occupied by this elderly couple, I am guessing has been married 40 or so years.  All through the different courses, five in all, they did not speak.  They gobbled their meal in silence and would only speak with the waiter separately.  What was that about?  They did not seem like they were fighting or something.  At least they were not bickering like the Barones, is this how you spell it, Marie and Frank, Raymond’s parents.

By the way, in this cruise, there are 700 Canadians, 600 Brits, 300 Americans, 160 Germans, and 150 Aussies, and some minor groups.  I told hubby being with all these Brits and Aussies make even my thoughts come to me in British accent.  He laughed.

We were reminded more than once to set our clocks one hour back, must be because we’re in Alaskan time zone.  More later.